How do you translate Martinson? 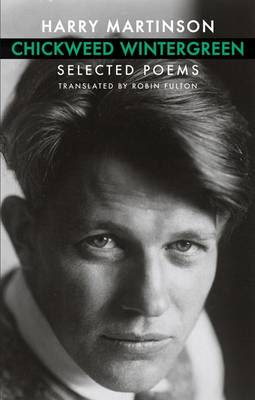 Already the transformation of Aniara, the Nobel prize winner Harry Martinson's major work, into an opera in the 1950s was like boiling down an ox to a stock cube. And that was just a matter of "translating" Martinson's Swedish into libretto-Swedish. How difficult would it not be to translate Martinson's complex and beautiful idioms into another language altogether, and furthermore do it with a material that is up to 80 years old?
Scottish author and swedophile Robin Fulton took the challenge, and for this he must be widely and heartily recognized. The anthology "Chickweed wintergreen" is a big cultural event. It also provides Swedes with an opportunity to introduce our favorite author to relatives and friends who do not understand Swedish that well.
For those who have never been faced with the task of translating poetry, it might be instructive to study some of the problems that may arise. Let's do a little experiment with the title poem from the anthology. First, Martinson's original version:

This poem is a fine example of Martinson's minimalist poetry, in which a philosophical idea is illustrated by scene from nature. Since there is so much effort put into the selection of each word, this also requires that the translator makes a prudent choice. He must first translate the very essence of the poem (with the risk of falling significantly wrong if the interpretation is wrong) and also be faithful to the mood that the words attract, presented by the associations that the reader unconsciously adds. Keywords are in this case, verbs and adjectives: frodas, reder sig, spensliga, vekhet, bestämdhet.(thrive, settle down, slender, tenderness, firmness).
So what happens if you completely ignore the work of the human translator/interpreter and instead mechanically translate the poem without further reflection? I can not resist the temptation to process the poem through the automated translation software provided online by Google. This is the result:

Chickweed thrives never.
They just settle down
with barren nights in the moss.
They are slender,
but know nothing about the sweet mellowness
To tillskylla summer.
The slender definiteness
is not less than the oak.

The result is almost understandable (word order is sometimes wrong, the word "nätthet" (petiteness) is mistaken for "night" and the word "tillskylla" is missing in the program's dictionary and remains untranslated). The translator's secrets are partly revealed when we compare the machine-translated poem with the translation as Robin Fulton has done:

Never luxuriates.
Yet manages, sparingly
and neatly in the moss.
The flowers are delicate
but know nothing of the sweet pliancy
you would foist on summer.
The determination of the fragile
is no less than that of the oak

The translator chooses not to use the word "thrives" to describe what the Chickweed wintergreen does not do. He uses “luxuriates” instead. You understand why if you look up thrive in the English dictionary, for it says that the word also means "trivas" (feel at home). It must thus be disposed of by the right-thinking translator. Instead, he chooses the words "luxuriate" which is a less common word, but that has a more correct connotation.
"The slender definiteness" in the direct translation becomes a completely different expression in the final, published translation: "The determination of the fragile".
Thus continues the translator, word by word. He weighs on golden scales, if possible, ensuring that content, underlying meaning and word music is as accurate as it can get. Like the painter who sometimes takes a few steps back to look at the painting on the easel, the translator must sometimes take a look at the big picture and maybe change a word, once again, to go right.
Direct translations of poetry have very slight possibilities to be successful, it seems.
If we finally make the experiment to allow the same software translation process Fulton’s English translation into Swedish the result is:

Alas, this is not Martinson. Instead, the machine shows once again its inferiority. The word luxuriate is not to be found in the dictionary. The term "foist on" gets the rough translation “pracka på” (touting), which has a completely different connotation than "tillskylla" in the original poem. But “söta vekhet” (sweet mellowness) we and Martinson get to keep through this ordeal of experiments!
Upplagd av Lönnboms lilla röra kl. 08:13 Inga kommentarer: